Thanks to everyone who participated in our first Level-Up Awards! In this post, you can take a look at who leveled-up this month and what they’ve been working on.

Please keep in mind: we know there are lots of people in St Louis doing awesome game development that didn’t submit an application for any awards. That’s cool, too! For instance, 286 people came together for the Global Game Jam in St Louis and made a lot of awesome games!

This isn’t a contest in any shape or form. It’s simply a way for local devs to share what they’ve been doing and get a little award for their efforts!

Here are some people who dedicated at least 15 hours or more to game development this month!

Katherine Brennan learned how to use SpriteKit in Swift for the Global Game Jam. You can try out her game here! https://globalgamejam.org/2018/games/love-wind 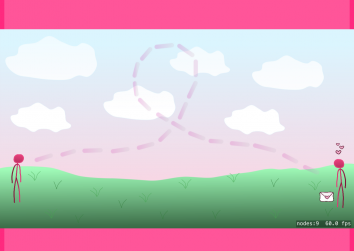 Bryan Maynard dug into Babylon.js and learned how to code a full character movement controller. You can see the result of his efforts here: https://github.com/MayBGames/babbling-on

David Vogt at The Ludicrous Ones has been keeping gamers appraised of his progress on “The Bounty: Deluxe” via his Twitter and Facebook pages.

The Score Attack RPG is now available on Steam. Get in on a new kind of adventure now; earn a high score and cement your place in the record books! Face countless monsters, secrets, traps, riddles, and more in this unusual 4th wall breaking adventure! https://t.co/y7L6rZeal5 pic.twitter.com/4NjDL25CJW

Jenny Gibbons from Woodsy Studio contacted a lot of press about her upcoming game, miraclr – Divine Dating Sim, and got some coverage on Hardcore Gamer.

Jenny got her friend to play-test Echoes of the Fey: The Last Sacrament, then noticed her friend had trouble remembering her way around town. To help players with that issue, she implemented an arrow-guidance system.

Wouldn't it be nice if you always had arrows telling you where to go in life? Welp, that probably won't happen, but now we have GUI arrows leading you to your destination in Echoes of the Fey: The Last Sacrament, at least! #ue4 #gamedev pic.twitter.com/7WVqG32zEm

Bryan Maynard of MayB Games created a github repo that actually functions as a tutorial. Check it out here!  https://github.com/MayBGames/babbling-on

Malcolm Pierce has been teaching UE4 and level design at Lindenwood University. Together, he and Jenny Gibbons also spoke to the local community about finishing games: https://www.meetup.com/St-Louis-Game-Developers/events/246654167/

Malcolm Pierce wrote a lot of new content for miraclr – Divine Dating Sim while preparing it for its upcoming Steam release on February 14!

Jenny Gibbons added a lot of new scenes to Woodsy Studio’s ongoing project, Echoes of the Fey: The Last Sacrament.

David Vogt of the The Ludicrous Ones released “The Bounty: Deluxe” on Steam!

Congrats to all you game devs!

Posted in News | No Comments »